Benefits of Having Courageous Confidence and the Faults of Lacking It 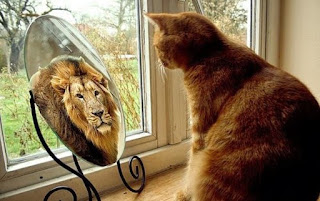 Benefits of Having Courageous Confidence and the Faults of Lacking It


Seeing the great importance of having confidence, whether in the realm of spiritual or worldly endeavors, today I am writing my blog on this subject. Generally speaking, in Mahayana Buddhism, we cherish others more than ourselves, offer all profit and victory to others, and accept all loss and defeat upon ourselves. Apart from pure Dharma practitioners, such an attitude is very rare in society during these viciously competitive times in which we live. However, while it is true that we should abandon pride, jealousy, fighting, and abuse of others in order to try to gain some kind of victory for ourselves, I have never seen a scripture or heard any lama say that courageous confidence is useless for the attainment of Buddhahood. Pride and confidence are different. The causes of developing pride may be family lineage, wealth, good looks, education, and so forth. Arrogantly exaggerating some slight good quality that we have, we think we are really something! Thus, pride develops out of a mistaken view of ourselves.
Fearless confidence, on the other hand, is a real antidote to laziness. As long as we are lazy we will not accomplish anything worldly or spiritual. The essence of courageous confidence is the attitude that we can accomplish something, and that we will never give up until we do.  In particular, among the many special characteristics of Buddhist Tantric practice, confidence is especially important. No one attaining Buddhahood or Arhatship these days as in ancient times, or if they do, our not knowing or hearing about it, is because we practitioners lack the confidence which is that special quality of tantric practice. People must have had stronger belief in Dharma when Buddha was alive! In any case, we can clearly see that they had great confidence. By just hearing Dharma teachings one time they saw the true nature of reality. At the same time they even dared to say, ‘I have seen the truth!’ and others accepted and acknowledged it. If someone these days said, ‘I have seen the truth!’ everyone would probably think they are crazy!
Having gone to Bodhgaya, before sitting under the Bodhi tree, Buddha said, ‘After I sit on this seat I will not rise before attaining complete enlightenment, even if I die!’ He sat down with such a firmly decisive determination and great confidence that he could attain Buddhahood. Another example of this in Tibet was Milarepa who made the promise that he would not emerge from his meditation cave before completing his practice even if he were to die. Again, this was a sign of his courageous confidence. We would never dare to make such a promise! That is because we don’t have such confidence.
That lack of confidence is, in short, connected with a lack of belief. An example is the statement in some tantras and oral instructions that, if you do certain practices, even if you are someone who has committed the five ‘heinous crimes’[1] you can attain enlightenment in this very lifetime. Although such statements exist, many of us think they were just made for some special reason, or just for some especially exalted person, but we don’t really believe that someone like ourselves could possibly do that.                     In Shangpa Kagyu Mahamudra Commentaries there is a listing of the worst difficulties for realizing the mind to be Mahamudra. One of those is not being able to believe it because it seems too easy! For instance, when a lama says, your present moment of awareness itself, left unaltered, is Buddha! they can’t believe it because they think it is too easy. I think this is at the very crux of the matter, a very important point. Many of us hope and pray to realize the nature of our mind but, since we don’t feel confident, we would probably find it hard to believe that we had realized it, even if we did!
If we think about Milarepa’s life, he knew there were many great lamas in Tibet, but one of the reasons for his special great faith in Marpa was because Milarepa’s main intention was to attain enlightenment during his lifetime, and no one but Marpa claimed to possess instructions which could accomplish that; I don’t think there were many others.
When Milarepa first met Marpa he said, ‘I am a criminal from western Tibet. Please give me instructions so that I can purify all the bad karma and obscuration I created in the earlier part of my life by killing thirty-five people and their horses, and so that I can attain Buddhahood in the time I have left.’
Marpa replied,

If one has all three: belief, confidence, and effort,
ones power is perfected, like that of a lion.
For wise ones who aspire to that which is good,
These three are their armor.

On a ground of stable conviction is a garden
Of beautiful flowers of confidence.
Nurtured by the soil, warmth, and water of effort,
may glorious fruits ripen before too long!

These days many people have belief but lack sufficient confidence and courage to be able to practice; or they have the courage and confidence but have fallen under the sway of laziness distracted by meaningless activities. They therefore lack perseverance and, because of this, do not succeed in getting the results of their spiritual or worldly endeavors. For this reason, I, Khenpo Karten, wrote this on the importance of courageous confidence on January 1, 2019 at Manjushri Dharma Center at the end of the morning meditation session.

Tibetan: Tashi Deleks!
Sanskrit: Sarva Mangalam!
May all be well and auspicious!

(I’d like to remind everyone that I write in Tibetan which is then translated into English, so please keep in mind that I am expressing myself from an Eastern and Tibetan point of view, and it is quite possible that my perspective, references, culture, poetic devices, and so forth, may seem different than a Western way of speaking and thinking. If it seems awkward at times, that is the reason, but there is no need to change it, except for spelling and grammar, of course. In any case, please make use of whatever resonates with you, and with whatever you find to be useful and beneficial. Thank you.)

translated by Jampa Tharchin
[1] killing father, killing mother, killing an Arhat, causing schism in the Sangha or, with an evil intention, trying to harm a Buddha