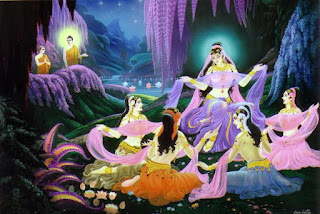 I am currently reading through the English translation of 'The Words of my Perfect Teacher' by Patrul Rinpoche. I am doing this in order to practice and improve my English, and also to compare the English version with the original text in Tibetan. Here, I've included a short story from the chapter on the defects of samsara. In this story, Patrul Rinpoche retells the account of Nanda, Lord Buddha Shakymuni’s cousin, who was very attached to his beautiful wife and found it difficult to pursue monastic life:

Nanda, Lord Buddha’s cousin, was very attached to his wife and did not want to renounce the world. Even though, by skillful means, Lord Buddha persuaded him to enter the Dharma and become a monk, he did not follow the precepts. He was about to run away, when the Buddha miraculously transported him to the top of a snow mountain and showed him a one-eyed monkey. The Buddha asked Nanda, “Which do you find more beautiful, this monkey or your wife Pundarika?”

“My wife,” replied Nanda, “a hundred or thousand times more!”

“Good,” replied the Buddha, “now let us go to the realm of the gods.”

When they arrived, the Buddha sat down and told Nanda to go and have a look around. Each god lived in his own palace, surrounded by many young goddesses, and enjoyed inconceivable pleasure, happiness, and abundance. However, there was one palace with numerous goddesses but no god.

Nanda asked why, and was told, “In the realm of the humans, there is a man called Nanda, the cousin of the Buddha, who is following monastic discipline. This action will lead him to be reborn among the gods, and this palace will then be his.”

Nanda was overjoyed. He went back to the Buddha who asked him, “Did you see the gods’ realm?”

“I certainly did!” replied Nanda.

The Buddha said, “Good. Which do you find more beautiful, your wife or the young goddesses?”

Once back on earth, Nanda observed monastic discipline perfectly. Then the Buddha addressed the monks: “Nanda has renounced worldly life in order to be reborn in the divine realms, but all of you have become monks in order to go beyond suffering. You and he are not on the same path. Do not talk to him anymore. Do not be intimate with him. Do not even sit on the same seat as him!”

All the monks obeyed, and Nanda was very upset. He thought, “Ananda is my young brother; at least he will still have some affection for me.” But when he went to see his brother, Ananda got up from the seat and moved away. Nanda asked him why, and Ananda told him what the Buddha had said. Nanda was heartbroken.

At last the Buddha came to him and said, “Nanda, will you come to see the hells?” Nanda agreed, and the Buddha transported them both there with his miraculous powers. The Buddha then said, “Go and look around.”

So Nanda set off to explore, visiting all the realms of hell, until in one place he came across an empty pot with a blazing fire crackling inside and a large number of the Lord of Death’s henchmen all around. He asked them why there was no one in the pot.

“There is a young cousin of the Buddha called Nanda,” they replied, “who is practicing monastic discipline with the intention of being reborn as a god. After enjoying the happiness of a celestial realm, when his merit runs out he will be reborn here.”

Nanda was terrified. He returned, and thought things over. To be born amongst the gods in the future and then to end up in the hell realms made no sense, so he developed a real determination to seek freedom from samsara. Having seen the hells with his own eyes, he never did anything that transgressed the precepts even slightly, and the Buddha extolled him as the disciple with the best control over the sense-doors.

We do not need to go so far as to see the hells with our own eyes. A simple picture is enough to frighten us and reinforce our desire for liberation. It is for this reason that the Buddha asked that the five-fold wheel representing samsara be drawn at the doors of the Sangha’s assembly halls. As Lord Nagarjuna said:

If just to see pictures of the hells, to hear descriptions,

Or to read and think about them brings you such terror,

What will you do when you experience there

The full, inexorable effects of your actions?

Reflect, therefore, on all the different kinds of suffering in samsara. From the depth of your heart, turn away from all the ordinary goals of this life. Unless you give up worldly activities completely, whatever Dharma you may claim to be practicing will not be the real thing.