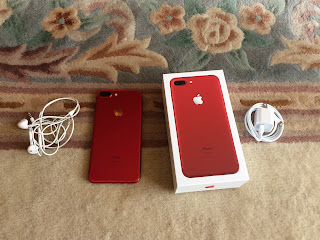 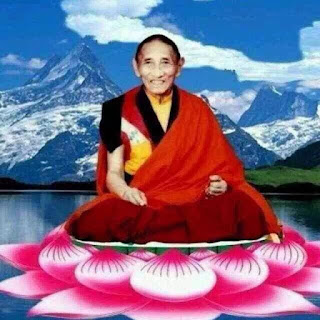 if you have devotion.The guru is always with you! 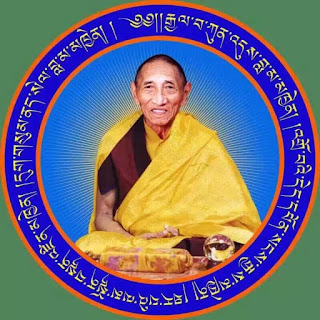 Today being the anniversary of my root Guru’s passing, I wanted to take the opportunity to say a few words about the Guru.
NAMO GURU BUDDHAYA
Homage to the Guru Buddha!

In the tantric Buddhism of Tibet the Guru is perceived as extremely important. In both Sutra and Tantra, however, it is often stated that before accepting a Guru you should check to see if they are properly qualified or not. The word ‘Lama’ is a Tibetan word. In Sanskrit the word is ‘Guru’. Lama means someone higher than oneself, who is heavy. What is higher and heavy? They have higher scholarly knowledge than yourself, and they are heavy with realized qualities attained through practice. In short, a lama should be someone who is both a master scholar and an accomplished practitioner. We should first check for these scholastic and realized qualities in a Guru. It is said that we must first be skillful in checking the Guru; in the middle we should be skillful in our manner of relying upon the Guru; and finally we should be skillful in emulating the Guru’s realization and conduct. Once you have connected with a Guru who is suitable for you to rely upon, if the disciple practices with the perception of the Guru as an actual embodiment of Buddha it is auspicious and conducive for the disciple to swiftly develop realizations. When relying upon a Guru, whether blessings enter the mind of a disciple or not depends not so much upon the quality of the Guru as it does upon the quality of the disciple’s own faith and devotion, (the strength of their conviction that the Guru is Buddha and their gratitude for the Guru’s kindness.) Even if the Guru is Buddha himself, if there is no faith and devotion in the disciple’s mind it is difficult for them to receive any help from the Guru. It is a special characteristic of our Kagyu tradition in particular that by firmly deciding that the Guru is the nature of all the Buddhas, special realizations will develop in dependence upon practice of the profound path of Guru Yoga alone.

When we see this as just described, the Guru who appears to us in an ordinary form is equal to Buddha in terms of realization, but their kindness to ourselves is even greater than that of Buddha. We only hear of Buddha who lived about 2500 years ago and see his teachings, but we have never heard even one verse of Dharma directly from his lips. As said in Sutra,

Before what is called the ‘Guru’
Even the name ‘Buddha’ doesn’t exist.
The thousand Buddhas of this eon
All arose in dependence upon Gurus.

Thus it is said. Compared to many years of Yidam Deity retreat and mantra recitation, one session of meditation on Guru Yoga practice is more beneficial. Furthermore, as said in the Ati Köpa Tantra of Dzogchen,

Compared to meditation on hundreds of thousands of Deity forms,
Thinking of the Guru for an instant is superior.
Compared to millions of mantra recitations in retreat,
One prayer to the Guru is superior.

Our present Guru correctly teaches us what to practice and what to abandon like a mother instructing her child and, in dependence upon these instructions of holy Dharma, we begin to distance ourselves somewhat from the abodes of samsara; this is due solely to the Guru’s kindness. If we don’t forget the instructions given to us by the Guru and continue to practice them, it is certain that it is the Guru who will eventually set us onto the dry land of Liberation’s eternal bliss. If we have no faith and devotion, even if we spend our whole lives with the Guru, or even with Buddha himself, there will be no benefit; instead, we will see more and more faults in him. For example, like a stone in water, although the stone and water are together for the moment, the stone remains an ordinary hard stone. If your mind just becomes more and more rigid and jaded the more we sit before the Guru receiving teachings, it is as if the medicine of Dharma has become a poison. The effect of relying on the Guru and receiving Teachings should be that our mind can improve from its previous state. If that occurs the purpose of relying on the Guru and receiving teachings from them has been well served. If we ourselves have faith and devotion, the Guru’s compassion knows no bias; it is certain that we will definitely receive blessings.

In general, talking about the Guru is not comfortable for me. It seems as if I am praising myself. I am not saying today that I am a good Guru and that you should have faith and devotion in me. Accordingly, on this special occasion commemorating my Guru fifteen years after his passing I am speaking to you about the experiences I have had being his disciple since I was twelve years old and the kinds of benefit I have received through doing the practice of Guru Yoga. Yesterday, on the day of the commemoration, a very auspicious sign occurred. What was it? After everyone had gathered at the Dharma Center I stood up thinking that I should give an introduction about my root Guru. No sooner had I uttered the name of my Guru than that very moment his picture on the altar fell down in front of me. It was an extremely good auspicious sign. Prior to our reciting the Guru Yoga practice, the blessings of the wisdom-being Guru entered into our picture that we had to represent him. It was like the Guru came to our Dharma Center in person! Every single night for a week following our Guru Yoga practice I had dreams of my root Guru. Even though he is no longer alive, the power of his compassion and blessings have not disappeared.

During his life there were many amazing stories about him. He really had the characteristics of a holy being. We are so fortunate to be his followers. When I was doing my three year, three month, three day retreat in the practice hut, during the second and third year I developed genuine unfabricated faith in the Guru. Not to mention whenever I saw my Guru, whenever I uttered his name or just saw a picture of him, without choice tears would come to my eyes and I would weep. This was common knowledge among the nine monks who were my practice companions. I was nicknamed the weeping lama. I think I have lived up to that name.

Generally speaking, even apart from a Dharma context, what we call ‘belief’ is something very important in society. For example, even if we have to go see a doctor, if we have no belief in the doctor or the medicine, although the medicine is an important one and the doctor very skilled, the patient will not be helped, it is said. This is something that even scientists say. Belief is also important between members of a family. When you have belief in a Guru and then develop faith, finally, because of the force of your faith, blessings will cause you to cry and get goosebumps. The tears are a sign of blessings received.

Blessings received in dependence upon the Guru are the only way for realization of emptiness to arise. Generally speaking, there is a huge difference between a guru and a root guru. A Guru is anyone with more knowledge that yourself from whom you have received initiation, teaching, transmission, or commentaries. Even someone who taught you to read can be called a Guru. Root Guru, on the other hand, should be someone who has conferred initiation upon you, given you tantric commentary and oral instructions, and through introducing these instructions to you, you develop special realizations that you never had before. Their kindness to you can never be repaid; this is what is called the ‘kind root Guru.’

Even though you are my disciples, I am not telling you that you must have faith and devotion for me. I am telling you about my experience relying upon my own Guru. If you keep a picture of my root Guru on your altar you will be certain to receive blessings. Why is that? Because you are my disciples we will all receive blessings. Even his name is very wonderful. ‘Sang’ means clearing, the clearing of adventitious mental afflictions and their imprints. ‘Gye’ means increase, the increase of realized qualities such as compassion and wisdom realizing emptiness. His first name, ‘Sang-gye’ means ‘Buddha’, the same name as Buddha, himself. ‘Ten’, means Teachings, the Teachings of Lord Buddha. ‘Tzin’ means to hold, to uphold. In short, his name means that he is a holder, a protector, of Lord Buddha’s Teachings. He was a special Guru who was really endowed with the meaning of what his name implies. We are all disciples of the same compassionate Guru. Don’t think that you have never met my Guru, that you have never received initiation, teachings, or transmissions from him. You are my disciples. He is my root Guru. We are like one family. If you have faith and devotion he definitely extends his compassion to you and watches over you. Everyone who has become the disciple of this Guru should rejoice.

Father, venerable precious Guru,
Although you have long been a Buddha,
To the immeasurable good fortune of all short sighted beings like myself
You show yourself in the aspect of a Virtuous Spiritual Guide.

Through conventional virtues of body and speech
Primordial ultimate truth is not realized.
Therefore I and others shall always
Closely serve the glorious Guru!

That the dry field of my mind could receive
The water and fertilizer of bodhicitta
To grow a good harvest of holy Dharma
Is due solely to your kindness alone!

Each of your priceless Dharma Teachings
Exposes a mistaken, false hallucination.
O Lord Protector of Beings, Vajradhara,
What a joy that you are here now!

This ultimate truth, emptiness of unfabricated mind:
Seeing it nakedly, being introduced to it,
My mind turning in the direction of shunyata, selflessness,
Lord Guru, this is due to your kindness.

In the tracks of the Father Guru who once passed this way
Your child, yearning with faith and devotion, calls to you!
The cool raindrops of your compassion
Dispel the torment of my disciples.

To the minds of your subjects who grasp at permanence,
Master, your form-body has left for a moment.
But for transcendent wisdom of children who have devotion,
We are never apart, like a body and its shadow.

Father Guru, You are delighted by your attendants’ service;
Your son promises to serve you for the rest of his life.
Please bless me to be like you
With expanse of realization bursting forth!

This inside talk about the Guru, Kyabje Sangye Tenzin Rinpoche, a fully enlightened Buddha who came to this world in the form of a human being, whose kindness can never be repaid, was written on the 26th of February, 2017, fifteen years after he withdrew his form to the Pure Land, on the occasion of the offering ceremony commemorating his passing. Because of some special signs that occurred when practicing his Guru Yoga, his inferior disciple Khenpo Karten wrote what he thought in easy to understand colloquial language to post in his daily blog, in his room of Manjushri Dharma Center in California, North America.