In this blog, I want to share three recent heartbreaking incidents that took place inside Tibet:

1) Every year, Tibetan children are released from school for two months for their summer holiday, and these students then return home to their parents. As one would expect, children coming home for the summer are excited and happy to spend time with their parents, and the parents themselves are very happy to have their sons and daughters back home with them. With their children gone for most of the year, parents make an effort to teach them the Tibetan language and familiarize them with their culture. During this summer break, parents take their children to visit local monasteries and immerse them in their Tibetan culture. Moreover, with Chinese language as the medium of instruction at school, parents prioritize sending their children to special Tibetan language classes if and when these courses are available in their locality. Summer break is really the only chance for these children to become acquainted with the Tibetan culture, to learn the Tibetan language, and to immerse themselves in Tibetan Buddhism by doing things such as visiting monasteries and meeting Tibetan monks and Lamas. 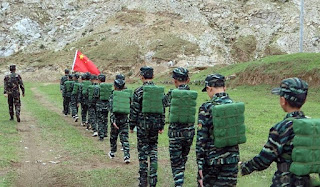 Being aware of the Tibetan parents’ initiatives to educate their children and inculcate Tibetan values, the Chinese authorities forced school children to register for a military training program during their summer holiday.  Recently, in the area of Kongpo Dhaksum Tso, children between the ages of 8 and 16 were recruited by the local Chinese authorities to register for a training camp focused on the study and use of arms. Most of the children from this region attend schools in Lhasa because of the location’s close proximity to the capital. 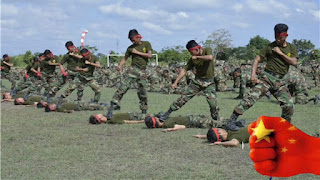 When children came home for their summer holiday, they were rounded up and forcefully enrolled in this new training program.  Never having been trained to use arms before and forced to attend this camp, the children were extremely disturbed. If they refused to participate in this program, they were threatened with expulsion from their school in Lhasa and taken away from their parents.  Refusing to participate also meant that they would fail in school despite having good grades. During the arms training, children were brainwashed and fed with the Communist Chinese government propaganda that the Chinese leaders like Mao Zedong and Xi Jinping benefited Tibet greatly and also implied that Dharma practice is primitive and obsolete. Nevertheless, these children had no choice at all and were forced to attend this program. The summer holiday being the only time to be home, this was extremely difficult for both the children and their parents. Being one of the few times that they were able to spend time together, parents and children were heartbroken. 2) The Chinese authorities have always used force upon the Tibetan people.  About four years ago, thousands of monks and nuns who resided at Yarchen Gar were forced to leave their home and spiritual community. Yarchen Gar was a community of around 18,000 monks and nuns who came from the surrounding regions and lived in their humble dwellings for over 15 years. Originally just a small retreat center, Yarchen Gar evolved into one of the most famous centers of the Nyingma tradition. Residents’ only purpose while living there was to learn and practice Dharma. As is well known, the Chinese government does not approve of any kind of religion, particularly Tibetan Buddhism. Additionally, in communities such as Yarchen Gar, which centers around the practice of Dharma, the Chinese government is quite fearful; with many young monks and nuns staying in the same place, these types of communities are more likely to cultivate and foster political activities and revolutionary developments for Tibetan independence. Historically, such movements have often come from similar environments. Subsequently, all their dwellings were bulldozed, and they had no opportunity to even take their belongings. Monks and nuns were forced to disrobe, and many committed suicide.  Under duress of the Chinese government, about 300 nuns were stripped of their monastic robes and forced to sing praises of the Chinese government and their leaders. 3) In the Kanzu region of Tibet, the revered Khamar Gonpa, a Sakya monastery which was renovated after its complete destruction in 1959, was forced to shut down.  Many lamas and monks from the monastery provided support to the local communities that did not please the Chinese authorities. During COVID-19 pandemic, many people, both Tibetan and Chinese, turned to the monastery for support in their time of need. The Chinese government may have seen this as a form of competition and antagonism, and may have been concerned that people’s minds were beginning to change. This monastery was home to over 400 monks, and the Chinese authorities ordered all the monks to disrobe right away. In one video clip, I saw a monk attempting to commit suicide in that very monastery. Here is a link to the video; please be advised, it is very sad and difficult to watch:
Video of monks forcibly leaving Khamar Gonpa

With such atrocities still happening inside Tibet, I cannot bear to live with my eyes and ears closed.  It is time that we stand up for truth and justice to prevail inside Tibet.  I hate to add more sad news to the current plight of the world, but the truth must be told and heard by the global community outside Tibet.  As His Holiness the Dalai Lama has always championed truth and democracy, if you are a supporter of truth and justice, I plead with every one of you to support our cause and stand in solidarity with the Tibetans people inside Tibet.

I, Khenpo Karten Rinpoche, dictated this message in September of 2021 in order to raise awareness of the atrocities committed in Tibet and the plight of the Tibetan people. This blog was translated and transcribed by Dechen Baltso, through a series of conversations and audio recorded messages, and further edited by my student, Karma Choeying.