Happy Mother's Day to my Father 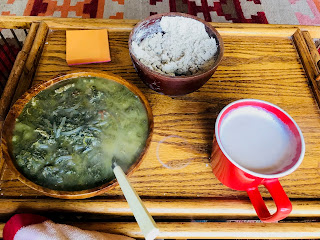 My Kind Father and the Wooden Bowl

These days some young people, when they become self-sufficient and make new friends, they completely forget about their kind parents. When their parents get old they never even go back to see them. I have seen this very sad situation with my own eyes. This might just be a custom or culture of a country, but no matter how your parents treated you, because it was your karma to have them as your parents who gave you this life, I think it is a big mistake to just say, ‘My parents didn’t treat me well,’ and to only think of them as terrible people. To respect, serve, and look after your parents is not just Buddhadharma; it is an upstanding, noble way of being from any perspective. Plus, if you don’t treat your parents well, when you have children of your own, the likely result of that karma ripening will be that they become a big problem for you, and cause you a lot of irritation and annoyance!

Please, everyone, lovingly care for your parents!

Karmically ordained kind father, it has been
Twenty-two years since you left for the Buddhafields.
This brown wooden bowl by which I remember you
Is testimony that I will never forget you, great father!

You were my father as well as my mother;
You were also my Teacher and Master.
You are everything to me;
Your kindness is vast, dear holy father.

My being here today and being a kind person
Is all due to your benevolence.
My being alive in this world and all the good
That I accomplish is due to your kindness.

In order to repay your kindness, your son promises
To fulfill your deepest, innermost wishes:
To make my life meaningful and to powerfully benefit others;
I will never give this up until it is accomplished.

On this world-wide Mother’s Day holiday,
I remember this wonderful person, my father,
By means my brown wooden bowl, and Tibetan food
Celebrating in memory of you, never forgetting.

By power of the profound loving bond between father and son,
And my life-long perseverance in the practice of holy Dharma,
I pray that we, father and son, will meet in future lives
In Buddha Amitabha’s Pure Land of Bliss, Sukhavati.

At a half-way point in his life, this orphan who wanders to the ends of the earth, Khenpo Karten, promises that, from this Mother’s Day onwards, I will always celebrate the memory of my father every Mother’s Day. With memories of my kind father welling up within me, I offer this on my blog of Mother’s Day, May 13th, 2018. 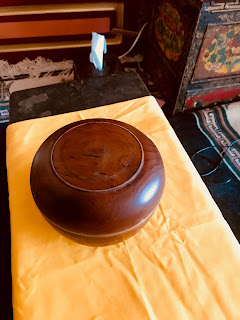