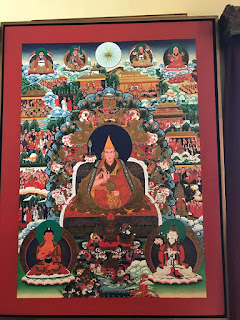 His Holiness Came to the Thargyen Ceremony. 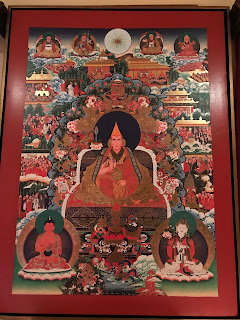 Last Tuesday, there was a knock on my door.  A woman appeared and said she had something to give me.  I was in the middle of my practice and usually do not open my door to anyone during my morning practice.  She said she had a picture of His Holiness the Dalai Lama to give me.  I assumed it would be just a picture but she described that it was no ordinary picture and that I should go to her car to get it with her.  When we went to her car, it was a very big and beautiful Thangka – a hand-painted Tibetan art, depicting the life of His Holiness.  It was indeed an extraordinary Thangka made of fine material and a great work of art.

I was happy, in fact joyous beyond expression.  The woman explained a few reasons why she gave it to me but I did not understand everything.  The day was Tuesday and it was my soul day.  There is a saying that fruition happens on a soul day.

The following day, Wednesday, was the day we had planned to celebrate the completion of 21 month-long study of Thargyen, a text by the immeasurable Gampopa.  We offered certificates to all the students who completed the study of this text.  Wednesday is also His Holiness’ soul day and Tuesday being my soul day, it felt extremely auspicious to be the soul days of both lama and student and to receive the Thangka of His Holiness.

I do not have much knowledge and practice but the little I have is because of my root teachers, Kyabje Sangye Tenzin Rinpoche and His Holiness the Dalai Lama, the embodiment of Chenrezig.  With utmost conviction, I have the deepest reverence in my heart for both these two root gurus.

When I look back and reason why this Thangka came to me, a year and nine months ago, I attended His Holiness the Dalai Lama’s 80th birthday celebration in Los Angeles.  At the gathering, amongst thousands of attendees, His Holiness, with great compassion, looked specifically at a few of us lamas and monks, and spoke to us.  I felt like he spoke to me and was deeply affected by it.  He said that when we teach, especially to non-Tibetans, we must offer the best and quality teachings with the purest motivation for the benefit of the students.   He stressed that if teaching are reduced to business and mere mundane samsaric activity, it will do more harm than good.  Personally, I resonated strongly to this advice.   Usually, His Holiness always gives us compassionate advice but this affected me very much as tears flowed from my eyes.

A few days after returning from that event, we started the Dhakpoe Thargyen class.  In keeping with his advice, there isn’t a more quality teaching than the teachings of Dhakpoe Thargyen and so I decided to teach this text.

It was extremely auspicious to receive the wonderful Thangka of His Holiness a day before the concluding ceremony of the Thargyen teachings.  Everything seemed to fall in place without any preparation.   This cause and effect cannot be explained.  Receiving the Thangka, felt like His Holiness is not only looking upon me from afar with his great compassionate and wisdom eyes, but he, for fact, came to the Thargyen conclusion ceremony.

As the Kagyupa Lama saying goes, if the son has devotion, lama is completely impartial and never far away.  Of all my practices, my main practice is Guru Yoga and that day felt like an extraordinary ripening of samaya of my Guru Yoga practice.

I truly felt a sense of conviction that His Holiness is a manifestation of the great masters of all Buddhist traditions.

The auspiciousness of all this is beyond expression. 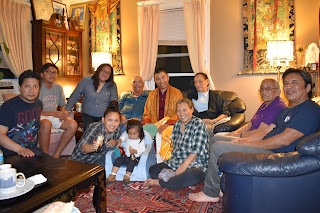