A powerful story about a Snake and a saw 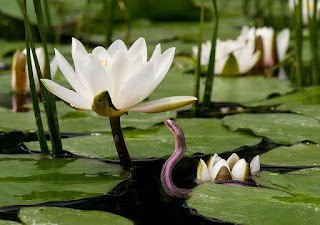 A snake found its way into a carpentry store and as it moved around, it unwittingly slithered over a saw lying on the ground and was cut. Instinctively, the snake struck out at the saw and bit the tool, seriously wounding its mouth. Not understanding what was happening and believing the saw to be an attacker, the snake decided to wrap its whole body around the saw to constrict and suffocate the supposed enemy.The snake squeezed the saw with all its strength, and in the process wound up killing itself.

Sometimes we react in anger to hurt those who have harmed us. We believe that they are going to further harm us and we retaliate, but we do not realize that we are in fact hurting ourselves. As it says in the 20th verse of The Thirty-seven Practices of Bodhisattvas:

As long as you do not subdue the enemy of your own anger,

External foes will only increase as you try to conquer them.

Therefore, calling up the armies of love and compassion,

Subdue your own mind—This is the practice of a bodhisattva.

In life, sometimes it is better to ignore situations, people, and their attitudes because the consequences can be harmful. The snake viewed the saw as an enemy and aggressor, not realizing the object was inanimate. Our own anger is the real enemy and not someone outside of ourselves. People often think to themselves that the other person has hurt them and then label this person as the enemy. If you think about this very seriously, this is a real misunderstanding.

If you reflect, when a person is angry with you, it stems from the anger arising in his or her own mind and is also how one reacts to anger. That is why anger often results in both parties fighting or arguing, sometimes forming long held resentments. Both are ignorant about where the real enemy lies. Everyone wants happiness and doesn't want suffering but we do not understand that when we react in anger, everyone suffers. It is better to show compassion to someone who did us wrong.

Just like the story of the snake above, the serpent thought that the saw was hurting him but in fact it was his own misconception and inability to let go of negative emotions. The idea of the enemy and anger itself arose from the faulty perceptions in the snake’s own mind. Similarly we have to check our minds to see where this anger is coming from. Two people’s misunderstanding as to who or what the real enemy is can result in dire consequences.

Shantideva said in the Guide to the Bodhisattva Conduct:

"If you tried to cover the whole earth with leather,

Where would you find enough?

But just putting leather on the soles of your feet,

Is similar to covering the whole earth."

This is a very good example; even if we had to cover up externally grasped objects, we could not, and it would be meaningless. Shantideva is saying that it would be better if we could take control of our own mind.