This Morning I Had an Amazing Dream 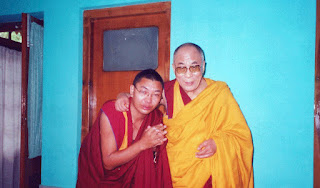 Since I had travelled a great deal through North and South India recently, I got a fever, so I was relaxing yesterday staying with my niece, Chöying Wangmo, at the Potala Samye Ling Guest House at the Tibetan Camp in New Delhi. Listening to the Tibetan Radio Voice of America and watching Tibetan films that I hadn’t seen in a long time I heard about the enlightening activities of His Holiness the Dalai Lama’s sacred Body, Speech, and Mind. He had just completed giving the great initiation of Sri Kalachakra to over 150,000 people in Ladakh. As I listened I had mixed feelings of joy and sorrow.
There were two things worthy of joy and two things that I had to feel sad about. The first thing I was glad about was that, although the Chinese Communist government had seized my country in 1959, and His Holiness, other Tibetan Lamas, and many Tibetans had to escape, and although Tibet was still under occupation, thinking about it from one perspective, that of taking negative circumstances onto the path, thanks to the planning and organizing of His Holiness and other Lamas and the Tibetan Government in Exile, Tibetan Dharma and culture continues to spread throughout the world more and more every day.
With regard to the second thing, we have long and peacefully protested for our primary goal, the return to a free Tibet. Having exhausted other means, and out of desperation, about a hundred and fifty Tibetans both inside and outside Tibet have even immolated themselves; but our wishes have not been realized, and the Chinese government’s oppressive policies have not changed. I was glad, however, that in spite of this, since 2008, Tibetans inside and outside Tibet have been able to consolidate their efforts. Furthermore, many young Tibetans have woken up and quite a number of them have been able to meet with knowledgable people all around the world. In particular, regions of India that were historically of Tibetan ancestry are daily transforming. Thanks to Tibetan Government Refugee Schools and monasteries of the various lineages, these people can be protected from this situation.
The first thing I was sad about was that when His Holiness the Dalai Lama was sixteen his country was invaded by the Chinese government and he had to go unwillingly into exile as a refugee. He brought the news of the plight of Tibetans to the public all over the world, pleading with palms folded, striving by every means throughout the day and night to stir people out of their apathy. Yet, because of the Chinese government’s wealth, power, lies, seduction and deception, the powerful nations of the world are solely interested in their own business and profits. It is a sign that there is no real interest in this world in human rights, freedom, or the honest truth.
The second thing I was sad about was, although I was able to come to India, because I had previously committed to a Dharma teaching schedule during this time, I was unable to go to the Kalachakra initiation. For me, from a Dharma perspective, there is no greater loss than to not be able to see my Lama and receive his teachings.
Tomorrow I have to go to America, my second country. For me, as a Dharma practitioner, being separated from my root Lama probably causes even greater suffering than when friends normally have to part. I went to sleep wondering when in the future I would be able to see His Holiness the Dalai Lama’s golden, smiling face again and receive his profound teachings.
Early in the morning I had this incredible dream. Maybe it was an imprint from when I recently visited Bhutan and had the opportunity to see some Bhutanese temples. In any case, I was inside a Bhutanese style temple and I saw His Holiness arriving and entering it with a small retinue. I was doing a daily practice of Vajrakilaya. With no reticence, even though there were many people around, I was reciting the Chogling Tersar Sangtig Vajrakilaya practice in a very loud voice. I was very surprised that His Holiness recited it from memory right along with me. At the mantra recitation we recited,

View the nature of your mind
As Vajrakilaya himself.

And at the completion stage we recited,

With your mind free of all elaboration, you are perfect in the nature of Vajrakilaya. Settle in clear light emptiness with a nature of luminosity, free from thought, in which the rising and liberation of unreal, illusory appearances happens simultaneously.

As we slowly recited these words His Holiness stared into me with his special eyes and recited this verse from the Wisdom Chapter of Shantideva’s Guide to the Bodhisattva Conduct:

When material and non-material things
No longer remain before your mind,
Then, with no other aspects appearing,
All is fully pacified in emptiness.

Then he touched his head to mine and, laughing very loudly, disappeared.

It is possible that this dream occurred because of my having watched the films of  His Holiness giving Kalachakra initiation in Ladakh the day before. In any case, in the morning I wept with tears of devotion, so much so that my pillow became soaked! And when I got up my mind was filled with unprecedented feelings of joy.

Having ceased ordinary appearances,
If you know your own awareness as the Lama,
You need not cry out in suffering,
Thinking you cannot meet your Lama.

Followers of the incomparable Gampopa were instructed
That pure reverence and aspiration accomplishes all,
And is the main method to realize emptiness,
And to clear away obstructions and enhance realization.

Although the Lama who benefits beings
Does not accompany me like my shadow in a Body of Form,
The actual Lama of unified awareness and emptiness
Is forever with me, so I am completely content.

I wrote my blog, July 19, 2014, about this amazing dream from last night as I was drinking lemon tea with my dear niece, Chöying Wangmo, at the Tibetan Camp Potala Samye Ling Guest House, in order to remember it in the future..